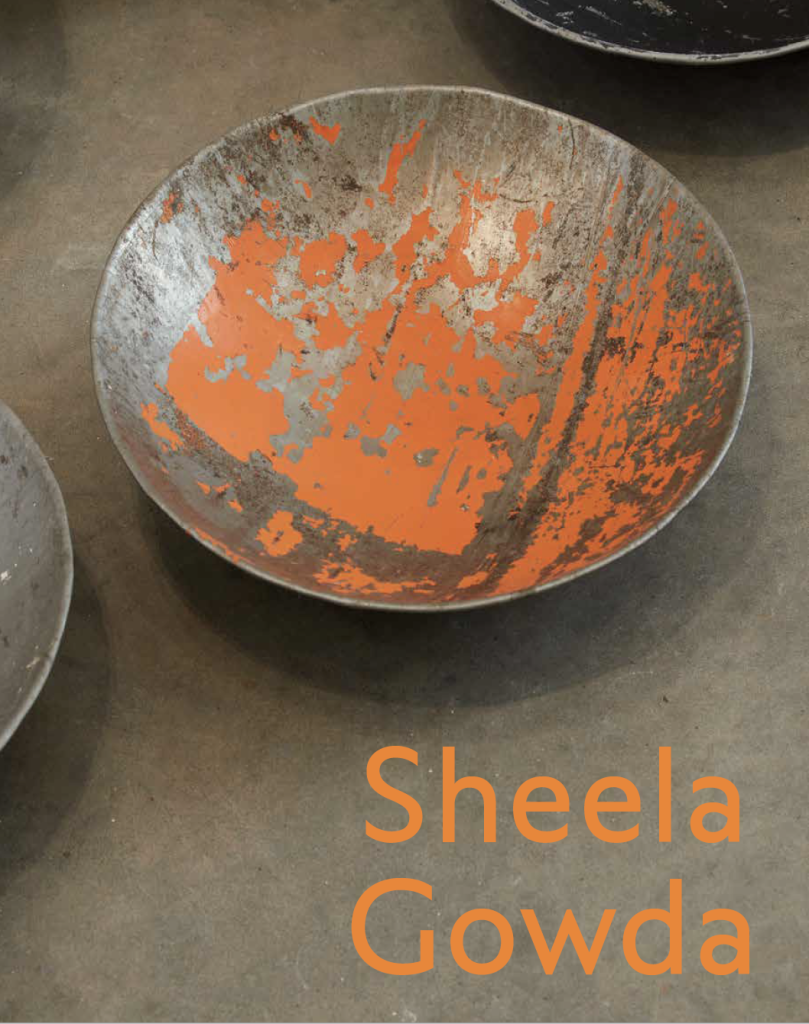 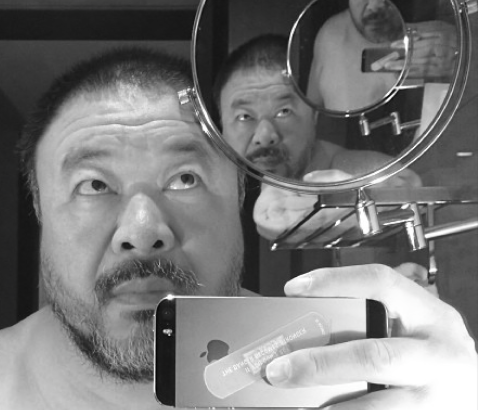 Join us on Wednesday 25 October for a conversation between Chinese artist and activist Ai Weiwei and writer and academic Anthony Downey. On the occasion of Ai’s first monographic exhibition in Belgium, they will talk about pressing issues including privacy and surveillance, the global refugee crisis and the critical potential of photography in the age of social media. The exhibition at FOMU runs from 27 October 2017 until 18 February 2018.

A full transcript of the conversation will be available in February, 2018, from Third Text. 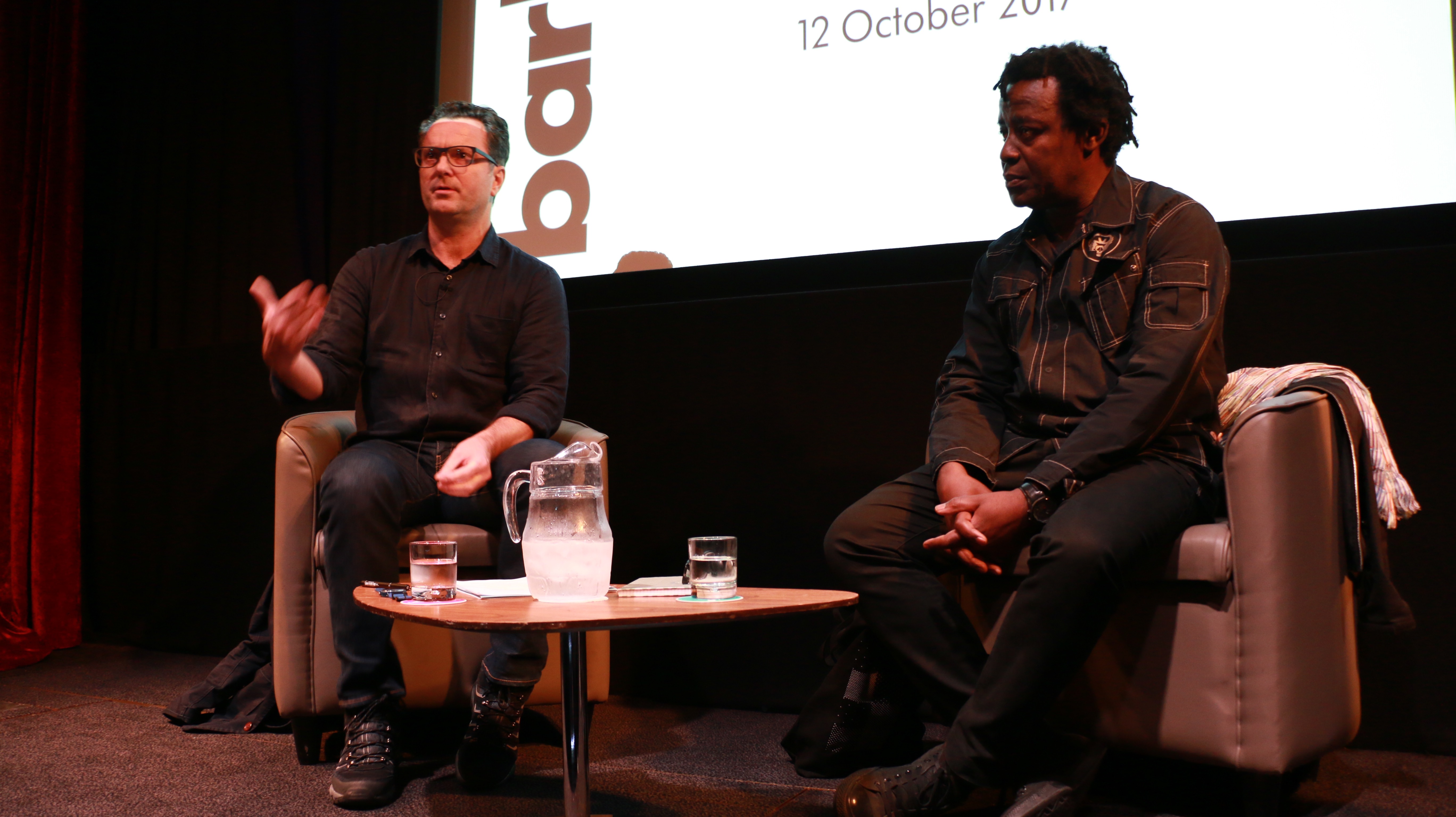 To coincide with new video installation Purple, John Akomfrah will be in conversation with academic, editor and writer, Anthony Downey.

Staged across a variety of disappearing ecological landscapes, from the hinterlands of Alaska to desolate, icy Arctic Greenland and the volcanic Maquesas Islands in theSouth Pacific, Akomfrah’s new film prompts the viewer to meditate on the complex relationship between humans and the planet.

To hear an earlier interview between Anthony Downey and John Akomfrah, on the occasion of his solo show at Arnolfini, Bristol, click here. 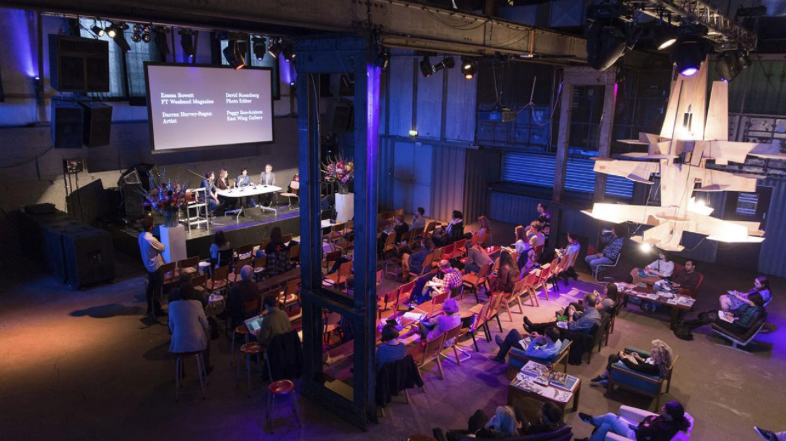 The Barbican Presents: On Photography and Politics Today 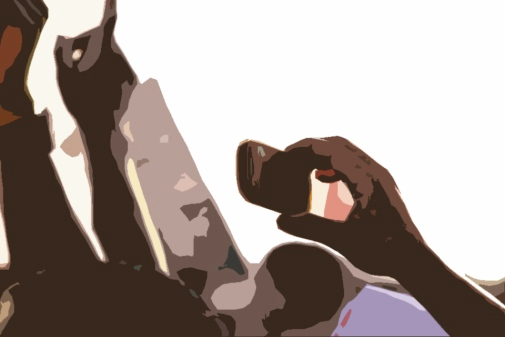 The workshop brings together theorists and practitioners to highlight the diversity of critical and theoretical perspectives. The workshop will focus on justice, journalism, documentary film, and art as overlapping sectors of the activist media ecology, each of which produces different kinds of public concern in regard to image activism in the Middle East.

Professor Downey will present a paper on the 8th of September in the Image Activism and Artistic Practice panel.

Prompted by factors such as globalization, digitization and mediatization, the role and impact of archives are currently undergoing decisive changes.The changing role of the archive as political technology has impacted the understanding and conduct of contemporary warfare. Whereas military and states used to control the production of information about – and thus also mainstream news’ media coverage of – warfare, different actors now leak, mass-produce, circulate, and mobilize information across various media platforms. Professor Downey will be presenting his paper “The Archive as Alibi”, an abstract of which is include below.

To learn more about the conference please click here

The Archive as Alibi

The photographic archive has been increasingly represented as an example of how visual “evidence” can be deployed for political, historical, ethical and economic ends. As a result, image-based archives have become associated with interrogative, critical, and juridical gestures: they are expected to do something, even if that is largely concerned with providing, to paraphrase Harun Farocki, a form of testimony against the archival image. In turn, there has been a critical and legal investment in the idea (if not ideal) of the photographic archive as an evidentiary form of witnessing that will in time answer to, if not ameliorate, present-day injustices. This is all the more evident in the wake of an unprecedented refugee crisis — one that now far exceeds the number of displaced refugees in Europe post-1945 — and revolutions across the Middle East. Images, in these contexts, are often positioned as proof of engagement and confirmation of responsibility; their archival potential apparently representing a bulwark against future forgetfulness. However, is it possible, this paper will ask, that the ongoing production and subsequent archiving of these images — specifically those of migrants and other displaced communities — are being submitted as compensation for the political and legal representation that is both withdrawn from, and thereafter denied to, refugees in the first place? Is it conceivable that photographic archives are not only becoming complicit in neutralizing political effect, but also in co-opting the political affect surrounding the figure of the refugee and the principle of justice? As models of visual representation, finally, what historical value will contemporary images of refugees — and their status as future-oriented archives — have as a tool for retrospectively enquiring into what occurred in an era defined by short-sighted protectionism, political exceptionalism and opportunistic extremism?

Book Publication: Don’t Shrink Me to the Size of a Bullet: The Works of Hiwa K (Walter Koenig Books, August 2017), Documenta 14, Kassel 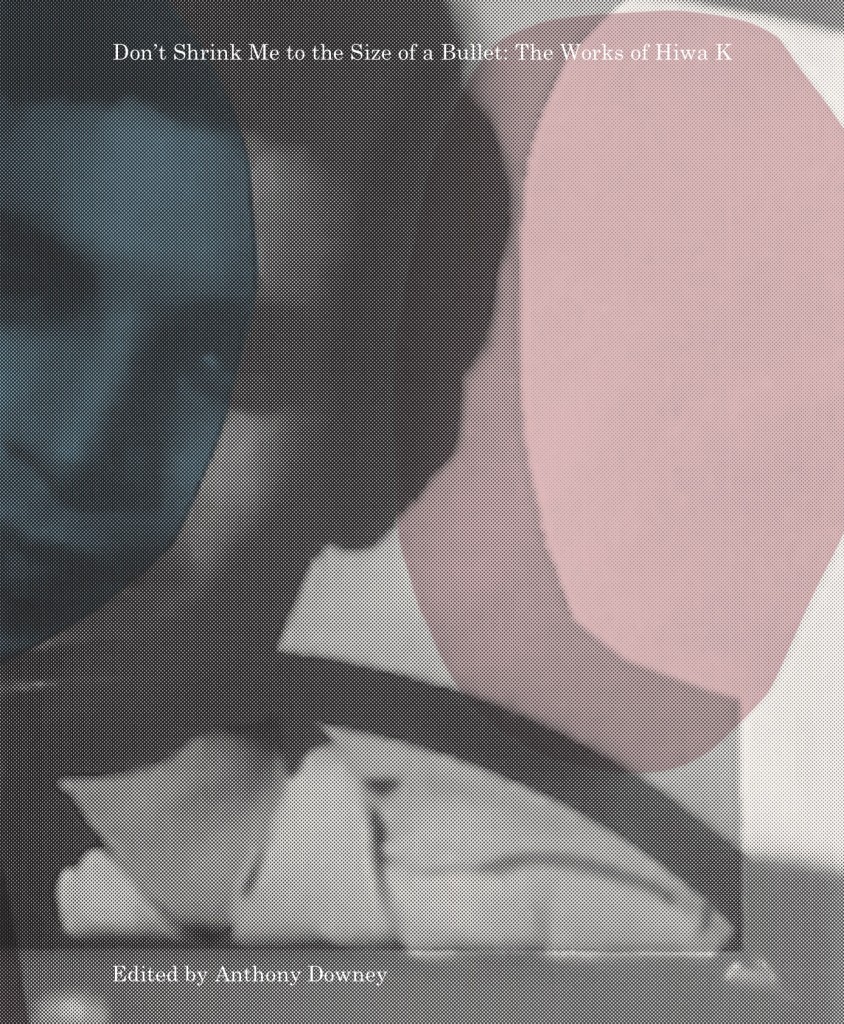 Last time I saw my mom before my farewell, I said, “Mom, I am leaving for good.  I don’t know… maybe I will not make it like the other 28 people who got shot last week” . She said “Son, if death comes, don`t panic. It is just death”.

Covering over decade of projects, Don’t Shrink Me to the Size of a Bullet: The Works of Hiwa K provides the first comprehensive account of the artist’s practice to date. Edited by Anthony Downey, with a foreword by Heike Catherina Mertens and Krist Gruijthuijsen, the volume includes essays by Lawrence Abu Hamdan, Natasha Ginwala, Bonaventure Soh Bejeng Ndikung, Aneta Szyłak, and a conversation between the artist and Bakir Ali. A series of texts have been prepared and revised by the artist, and he has also included a collection of anecdotes that recount gossip, stories, jokes, personal insights, conundrums, and aphorisms garnered from multiple sources. These have all been translated into Kurdish for the first time. The volume is fully illustrated and will contain extended notes on the works. 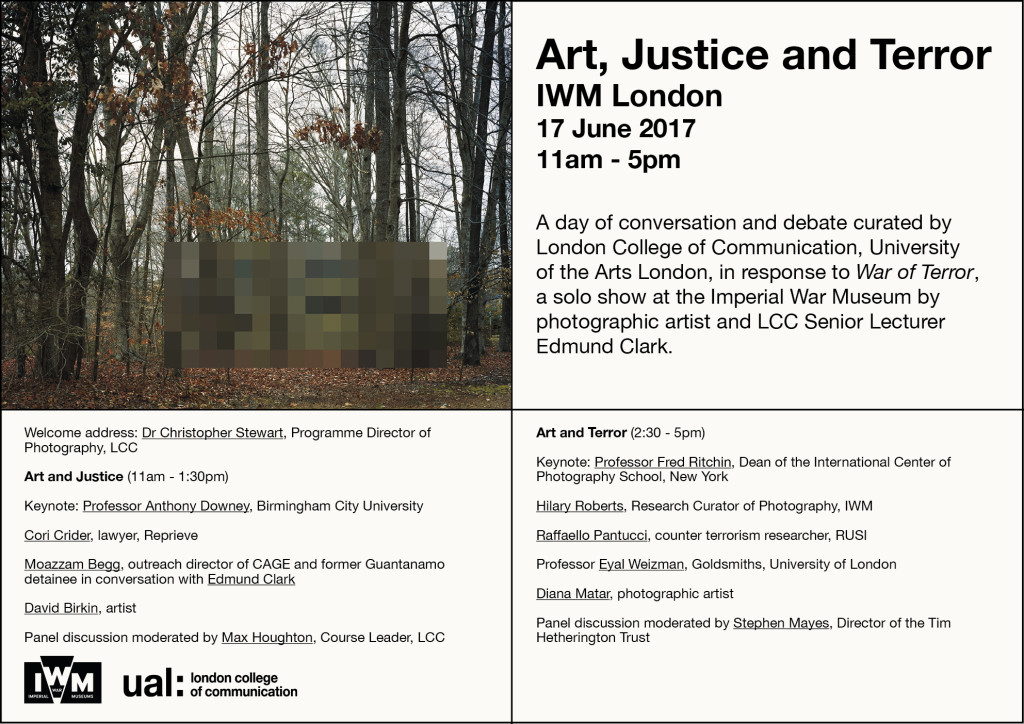 Debate: Art, Justice and Terror  I  A day of talks and panel discussions

Curated by London College of Communication

A series of talks and panel discussions in response to Edmund Clark: War of Terror. The programme will bring together artists, lawyers, eyewitnesses, writers and academics to discuss how art may contribute to informing social attitudes on matters of justice in a time of global conflict in which laws are sometimes absent.

How can art help bring justice to those directly affected by war? Can art question accountability? How might art manifest in the law itself? This morning session focusing on Art and Justice starts with a keynote by Professor Anthony Downey and features talks by Reprieve lawyer Cori Crider, former detainee and campaigner Moazzam Begg in conversation with Edmund Clark, and artist David Birkin. A consecutive panel discussion with the speakers is moderated by Max Houghton, Senior Lecturer at London College of Communication.

How can art represent a domestic experience of terror as a consequence of distant war? How can it help us to understand legal procedures enacted upon individuals for reasons of international security, which can in themselves be acts of terror? This afternoon session focusing on Art and Terror starts with a keynote by leading US writer Professor Fred Ritchin and features talks by IWM research curator Hilary Roberts, counter terrorism researcher Raffaello Pantucci, Professor Eyal Weizman, and photographic artist Diana Matar. A consecutive panel discussion with the speakers is moderated by Stephen Mayes, Director of the Tim Hetherington Trust.

How We Respond  I  Conversations – Artists on Conflict

How are contemporary conflicts represented by artists, poets, photographers and in drama? What impact can their work have on our understanding of conflict? This is a unique chance to join artists and creatives whose work explore, represent or question our understanding of contemporary conflict for a conversation; to hear their views and to ask questions.

Installations and performances appearing throughout the galleries include Imogen Piper’s artwork Encoded Revolt, which translates Syrian airstrikes into music, as well as exclusive live presentations of BBC Media Action’s radio drama Hay El Matar, translated from Syrian to English for the first time, and first-hand accounts of conflict and exile through Amir Darwish’s live poetry performances. 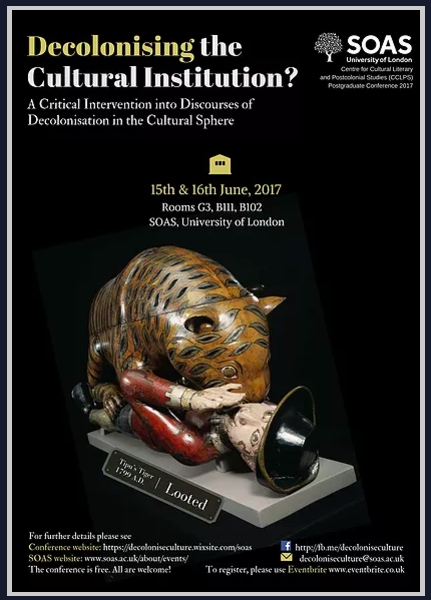 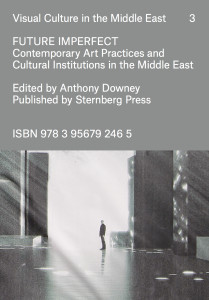 Future Imperfect: Contemporary Art Practices and Cultural Institutions in the Middle East critically examines the role played by cultural institutions in producing present-day and future contexts for the production, dissemination and reception of contemporary art in the Middle East and North Africa. It offers critical contexts for a discussion that has become increasingly urgent in recent years – the role of culture in a time of conflict and globalization – and an in-depth critique of the historical state of cultural institutions in an age of political upheaval, social unrest, exuberant cultural activity, ascendant neoliberal forms of privatization, social activism, and regional uncertainty.

Organised around three key areas, Future Imperfect draws attention to the ongoing demands and antagonisms that have affected cultural production across the region, both in historical and more recent post-revolutionary contexts. In doing so, it offers an in-depth discussion of how cultural producers have developed alternative institutional models to negotiate the constraints placed upon their practices. How cultural institutions operate within the conditions of a global cultural economy, and alongside the often conflicting demands they place on cultural production in the region, is likewise an over-arching point of reference throughout this volume.

While the politics of contemporary cultural production and institutional practices in the Middle East can tell us a great deal about local and regional concerns, one of the cornerstone ambitions of this volume is to enquire into what they can also impart about the politics of global cultural production. This involves exploring the multiple ways in which contemporary art practices are being reduced, willingly or otherwise, to the logic of global capital. What, in sum, is needed in terms of infrastructure for cultural production today, and how, crucially, can we speculatively propose new infrastructures and institutions in the context of present-day realities?

The publication is accompanied by a collection of special projects on the Ibraaz website from Leila Al-Shami, Wided Rihana Khadraoui, Lois Stonock, Nile Sunset Annex, Alia Rayyan and Husam Al-Sarray.

The production of this book was accomplished through the generous support of the Kamel Lazaar Foundation.