Anthony Downey is an academic, author, and editor. He is Professor of Visual Culture in the Middle East and North Africa (Birmingham City University). He sits on the editorial boards of Third Text (Routledge), Journal of Digital War (Palgrave Macmillan), and  Memory, Mind & Media (Cambridge University Press), respectively. He is also the series editor for Research/Practice (Sternberg Press/MIT, 2019–ongoing).

In his capacity as a Co-Investigator, Downey is the Cultural and Commissioning Lead on a four-year multi-disciplinary AHRC Network Plus award, where his research focuses on cultural practices, digital methods, and educational provision for children with disabilities in Lebanon, the Occupied Palestinian Territories, and Jordan (2020-2024). This award was preceded by an AHRC Development award in 2019. 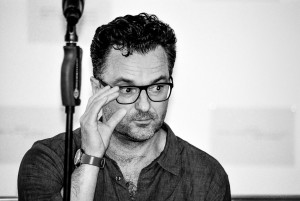